At the beginning of June, I travelled to Boulder, Colorado to attend and speak at RallyON 2013. This was my first time attending RallyON and I wasn't sure what to expect. I diligently downloaded the Spotme app as suggested by the event organisers and spent a good hour or two trawling through the agenda selecting the sessions to attend. I was travelling with my friend and ex-coach, +Mark Richards, who has always been a huge fan of Rally Agile Fellow, +Jean Tabaka, so I thought I would add Jean and +Laura Burke's breakout session, Scaling Collaboration: Be the Hero Your Agile Teams Need You to Be, to my selections.

On the first afternoon of the conference, Mark and I wandered down to HUB Boulder and found ourselves a couple of seats at a table up the front. Jean and Laura were setting up, writing on flip charts, and directing attendees to sort themselves into tables of 5. It is at this point that I panic, and turn to Mark with what I am sure was a look of sheer terror, and said "You didn't tell me this was going to be a joining in activity type session!". Mark smiles, clearly amused at my discomfort, and says "What did you think was going to happen at a Jean Tabaka session?"


As it turns out, Jean and Laura's session was one of my highlights from RallyON, despite the need to participate in group activities!  The technique used by Jean and Laura, was to run a workshop at the same time as teaching the participants how to have better meetings. Personally I have never seen or experienced anything quite like it, and was blown away by how clever the approach was. The hour flew by as I frantically tried to take notes in an attempt to remember everything so that I could share it with my team back in Melbourne.

(Having since read Jean's book Collaboration Explained: Facilitation Skills for Software Project Leaders, I can recommend it as a much better source of advice on collaboration and facilitation then my notes which are definitely not worth publishing!)

Over the course of the next couple of days, Mark and I ran into Jean at various sessions. We got talking one morning about how we "scaled culture" as part of establishing the EDW Agile Release Train and the role of Unity Day (our whole of train iteration kick off event). Knowing that Jean was scheduled to be in Australia later that month, for Agile Australia, I invited her to come and see Unity Day in action and cheekily suggested that it would be fun if she was willing to run her scaling collaboration workshop with my team. In what I have now come to know as Jean's very humble and generous way, she agreed!

Fast forward three weeks, it is Unity Day's 1st birthday and Jean Tabaka is our guest. After an hour of the usual antics from the train teams, I help Jean set up for the workshop. The audience is close to double the size of the one at RallyON and this time Jean is running the show almost single handedly. In true Jean Tabaka style she is immediately engaging and the EDW Engineers are open and participating. I could see the team was having fun and I remember hoping that they were also learning from the experience. 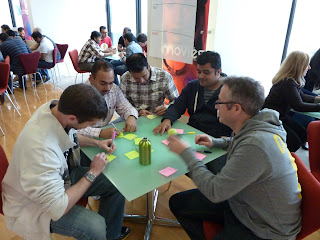 ", to give as prizes to the team. I figure its time to find out, what the team learn from their hour with Jean? What have they committed to do differently as a result? The three people with the best answers would win a copy of the book.

At first I was a little nervous that as much as the collaboration workshop had been fun, the focus on soft skills might not have resonated with my crew. I should have had more faith, even with only a short window of opportunity to respond, I received 12 submissions for the 3 books. Some highlights from the winning responses are below:

Plan, Prepare, Set Agenda, Get right people.
Focus on outcome/value, keep track of time, do not judge
Self assess to improve in the next meeting.

This session has provided me with some beneficial insights into the differences between taking control away from the presenter (which I have been apprehensive about doing) and being a respectful facilitator.

So, you may ask, all of that sounds great, but what has really changed?

Well its early days but I am encouraged by what I am seeing. Last week, the "alpha geeks" on the EDW Release Train, were scheduled to run a meeting with operations team, to get buy in to our new branching strategy. Historically, a meeting like this would have revolved around a 20 slide powerpoint deck and resulted in little more consensus than then need to schedule another meeting. However on this occasion, without any prompting from me, they decided to run a "Jean Tabaka meeting" - yes that is what they called it!

There was no powerpoint. The agenda was laid out scrum-ban style on the wall. There were large flip charts for capturing actions, decisions and the parking lot. All the material that needed to be discussed was displayed on the walls as information radiators. A single facilitator ran the session, remembering to touch the charts he was talking to, as he ran through the agenda. And of course there was a white board!  The team were very proud of themselves, even capturing photos of the event - just in case I wanted to blog about it! 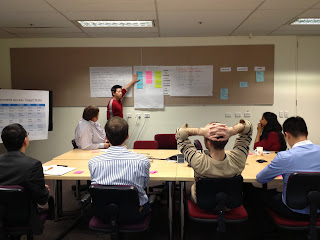 From all accounts the meeting went well and consensus was reached on the way forward. How do I know this? Because I received an e-mail on Friday with the link to a wiki page so I could have a look at the "outcomes of our Jean Tabaka meeting"!

The moral of the story, software engineers can facilitate, some of them just need a little encouragement to get started.