The squadification day had arrived! We had management buy in to allowing people to self-select into teams and a structure for our new new Agile Release Train (ART). I turned up with my Time Timer in tow ready to facilitate what I hoped would be a great beginning for this brand new ART.

Over the course of the week leading up to the self self-selection, the thought of launching a new ART with no experienced Scrum Masters had been on my mind. How we would find the right people for those Scrum Master roles? I tend to choose what I read based on what is on my mind, so I had picked up my copy of  +Geoff Watts's Scrum Mastery and reread a few chapters on my flights to and from Sydney that week.

I took two bright ideas away from this: (1) we had to reinforce the message at self-selection that the Scrum Master role “holds no authority", and (2) when asked to nominate a Scrum Master teams tend to know instinctively who will be the right fit. Inspired by this my first task on the day of the self-selection event was to track down the Release Train Engineers (RTEs) and suggest that rather than letting individuals self-select into the Scrum Master role we let the teams nominate their Scrum Master after the squads had been formed. They were agreeable so that became the new plan.

Now we had to get organised. Flip charts were drawn up for each squad and a Product Owner’s photo added. Everyone else's photos were laid out on a trestle table at the front of the room.  By 9:15am we had almost  full house, so we decided to kick off. I opened with a quick run through of the agenda for the day, followed by the lead RTE who set the scene for why they had chosen to use self-selection as the approach to forming teams. Then it was back to me to run through the logistics for the morning. 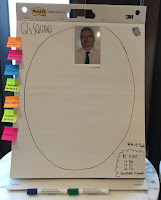 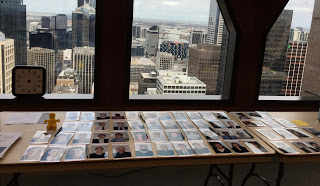