The three key ingredients in any ART launch are: teams, a well defined, force ranked feature level program backlog and the knowledge to execute in a lean and agile manner. In the case of the A&I ART, we now had teams and a backlog, we just needed the knowledge. This is where the SAFe for Teams training and the Scrum Master and Product Owner Orientation workshops came in.

Monday morning the teams returned to same venue we had used for the self-selection event, to commence two-days of SAFe for Teams training. I was thrilled that the organisation had taken our guidance and had gone all in for the event. Even the department head attended the entire two days.

There is something about all the teams on a train, including the leadership team, learning together, with their Scrum Masters and Product Owners that is just magical. Having spent many years convinced that training circa 100 people at once was nuts, then going through the process a number of times, I have to say I was wrong. If Harvard Professor J. Richard Hackman is to be believed, 30% of a team’s eventual performance is dependent on the initial launch of the team. Personally I cannot think of a better way to launch a team of teams than two days learning together. 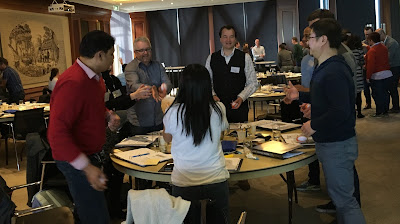 Read more »
Posted by Em Campbell-Pretty at 07:46 No comments: Links to this post