SAFe from the Trenches @ Agile Australia

In June, Pretty Agile partnered with Scaled Agile Inc. to sponsor the 9th Agile Australia conference. Included in this sponsorship arrangement was an opportunity to deliver a product demonstration to conference attendees. Given Scaled Agile Inc. are the creators of the Scaled AgileFramework and Pretty Agile are their premium implementation partner in Australia, what better “product” to demonstrate than some of Australia’s most successful SAFe implementations?

So, we gathered together executives from the Australian Tax Office, Yarra Valley Water, ANZ, Attache and Westpac to discuss their warts and all experiences with the Scaled Agile Framework. Here is what happened...

They're in the trenches. They're doing SAFe. They're implementing SAFe. We all know there are lots of rumours and opinions out there. So they're going to try and help us determine fact from fiction.

I'm going to start out with a couple of questions to the panel. Then we'll open it up to questions from the audience. First I'd like you to introduce yourselves and tell us a little bit about your SAFe journey and where you are in it.

David Webb (Westpac):  Okay I can start. My name is Dave Webb. I'm from Westpac Bank. We've been running SAFe in Westpac for about three years now. I've been involved with most of the Release Trains that we've launched along the way. I'm currently the Product Manager for our trains delivering an Enterprise DevOps platform for the group.

David Norris (Attaché):  G'day, my name is Dave Norris. I work for a company called Attache Software. We've been around for a while doing Payroll and Accounting software.  I was first introduced to SAFe at IAG, in a large programme of work there. I joined Attache to roll SAFe out through the company, at least through the IT side of the company there. So starting from scratch and trying to get buy-in is a lot of the pain points I went through. It's succeeding. We’re about two years into our SAFe journey.

Sam Kline (ANZ):  My name is Sam. I come from ANZ. I run the Analytics and Insights team there. We're just coming up to our 12 month anniversary for our SAFe rollout. We have one, Agile Release Train. We started with about 60 people on shore. We're now about 70 people on shore and 40 people off shore in Chengdu. Plus we've got about 20 to 30 partner people running with us. So we're roughly 130, 140 people in our Release Train.

Julianne Sykes (Yarra Valley Water): My name is Julianne. I work at Yarra Valley Water. My role there is Manager Portfolio Delivery, and I'm currently the acting CIO.  Our SAFe journey is twelve  months old. We've just completed our fourth PI Planning Event. We have one train, with about 120 people. We deliver the entire ICT delivery programme for Yarra Valley Water. All of our major enterprise applications, we are enhancing and modifying and developing through SAFe and Agile.

It's been a really good journey for us and I'm looking forward to sharing our stories with you.

Damien Hobbin (ATO):  Hi, I'm Damien Hobbin. I'm an IT executive with ATO. I head up a Digital Delivery team looking after the  some of the key retail offerings for the ATO, hopefully you've heard of some of them - ATO Online, MyTax, which I hoped you've used. If you haven't I encourage you to.  I'm also a champion and advocate of what we call Agile HQ. It's about driving enterprise agility, and  how we drive agility not just through IT but across the organisation.

We've been on our SAFe journey for close to three years now. I've been hands on with three Release Trains and there's at least eight in the ATO. It's been an interesting journey and quite a ride. We've got a lot of information to share with you, equally as we  also  share our learnings and ideas across Government as well.  We're seen within Government services as one of the leading adopters of Agile and SAFe in particular, so I'm here to happily answer any questions that you've got.

Read more »
Posted by Em Campbell-Pretty at 21:35 No comments: Links to this post

Check on my musings on Agile2017 on TechBeacon - Women in Agile, "The Spotify Model" and more!


Highlights from Agile2017: Gender, diversity—and lessons from the agilists

One of the things I love about the A&I Agile Release Train is their drive to learn. Following the Re-Squadification day the train held a focused retrospective in order to understand what had gone wrong and how they could avoid a reoccurrence of a long drawn out self-selection process in the future.  The insights were fascinating. There were three main drivers of the stalemate - a belief the teams of 6 or 7 would not be effective, “feature pitching” by Scrum Masters and Product Owners and people trying to do the right thing!

The frustration with team size I put down to a combination of decisions being made behind closed doors and lack of communication. Deciding the team numbers was perceived as a logical decision that didn’t require wide consultation. In hindsight I am embarrassed I didn’t think to suggest to the RTEs that they take the suggestion to the train before communicating it. Or even better involve the train in making the decision in the first place. It was naive of us to assume the teams would not have strong opinions regarding team size. I wonder if subconsciously we feared retaliation, as despite being three PIs in there were still fierce debate across the train regarding the need for component teams. In reality we just didn’t have holistic buy in to the feature team model.

The “feature pitching” was frustrating. Based on the learnings from the first self-selection event we had tried to remove the “work” from the decision but we probably had not been explicit enough in that respect. Teams were recruiting members based on the features they intended to pull. Again, I fear communication had been our downfall.

The third cause was more interesting and somewhat unexpected. In line with +Sandy and Dave’s guidance we briefed the train to consider the best interests of the company and the train in making the team selections. As the day went on, we came back to that message time and time again but it didn’t seem to make any difference. When the leadership dug into this post the event, we learnt that team members were staying put because they believed that their membership of a specific team was in the best interests of the company! 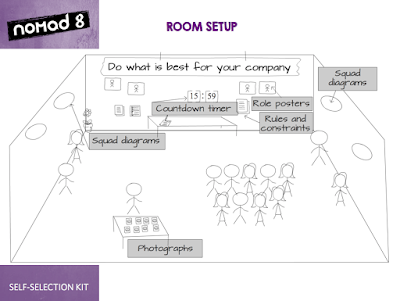 I also felt that “absentee voters” had been a challenge. In almost every case the person who was not present had given a specific instruction about what squad they wanted to be in and their proxy did not feel empowered to move them.

The opportunity to use these learning came around sooner rather than later, as the addition of some new delivery partners meant more teams on the train in PI5. Feedback from the last self-selection event indicated that the train valued the ability to do self-selection, however, they were not in a hurry to do it again! Wanting to empower the train, the leadership put it to a vote: Should the train self-select prior to PI5 or should the leadership team make the required changes and inform the teams of the outcome?

Read more »
Posted by Em Campbell-Pretty at 08:33 2 comments: Links to this post

Three PIs after the 6-Day Quick-Start it was time to “re-squadify”. We had promised the teams during the initial self-selection event that they were not making life long commitments and that they would again have the opportunity to self-select in two or three PIs time.

Over the preceding 6 months there had been a lot of change. The original 6 squads had been reduced to 5, as result of some parental leave and secondments. We had onboard two new squads based in China. The interns had moved on to their next rotation and there had been a few leavers and joiners, as is natural with any new Agile Release Train.

Re-squaditification presented the opportunity to revisit the constraints within which the teams would form. Specifically, we decided to look at team size and the approach to Scrum Masters and Product Ownership. The two squads in China had been through a small scale self-selection day just prior to the beginning of the last PI,  so we decided not to disrupt them and leave them out of the  “re-sqaudification” this time.

Read more »
Posted by Em Campbell-Pretty at 10:33 No comments: Links to this post